VILLA POJANA - POJANA MAGGIORE -
The project probably dates back to the 40’s in the XVI century and the work was completed in 1563 with the conclusion of the internal decoration. It seems that  Palladio  sought  the  logic  of  the architecture  of  ancient  Roman  baths trough a synthesized and simple style.

VILLA BARBARIGO - NOVENTA VICENTINA -
Nowadays used as the Town Hall, this villa is worth being observed for its Majestic exterio.

VILLA FRACANZAN PIOVENE - ORGIANO -
Built in XVIII century by the baroque architect Francesco Muttoni, the villa is at the centre of a complex of ancient buildings. It is famous for its kitchen with its collection of copper and its red marble sink, the bedrooms with canopied beds, the billiard rooms and dining rooms showing the furniture and history of past centuries. The villa is surrounded by a garden and a 99 acre park all of which is enclosed by a wall.

VILLA CAPRA (LA ROTONDA) - VICENZA -
Villa Capra is the work of Andrea Palladio from 1570 and in around 1590 it moved to the Capra family, hence its name. it is presently the property of the Valmarana family. La Rotonda was conceived to be in touch with the rural reality, as was required by the times. It isn’t separated by barriers or enclosed gardens but is surrounded by fields and it is the only villa by Palladio with a dome vault.

VILLA VESCOVI - LUVIGLIANO DI TORREGLIA -
This  extraordinary  masterpiece, harmoniously immersed in the Euganean hills, was built between 1535 and 1542 for the Bishop of Padua, Francesco Pisani, as a magnificent architectonic work inspired by the classics and des- tined to welcome scholars and artists. The project was antrusted to the ve- ronese painter and architect Giovanni Maria Falconetto.

VILLA VALSANZIBIO (BARBARIGO PINOZZI) - GALZIGLIANO TERME -
Villa Barbarigo is a 17th century Venetian mansion commissioned by the noble Venetian Francesco Zuane Barbarigo. The park belonging to the mansion covers 37 acres of land and is a rare example of a typical 17th century garden  which  houses  a  complicated fountain system. 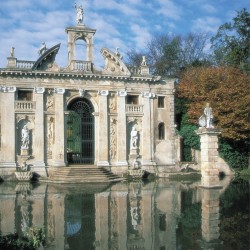